During SSC2022 Conference together with Rajith Vidanaarachchi and Przemysław Szufel I am going to give An introduction to agent-based simulations in the Julia language tutorial.

I want to create a simulation of genetic drift in Julia.

The idea of the model is as follows. On a rectangular grid we initially randomly put agents of two types (I will use true and false to denote them). In one step we pick a random agent and change its type to the type of one of its neighbors. We will want to check, using simulation, if in the long run all agents end up having the same color and how long it takes, on the average, to reach this state.

A crucial design decision when modeling this problem is how we define neighbors of an agent. Some classical definitions are Moore or von Neumann neighborhoods on a torus. However, in the experiment today I assume that if I have an agent in location (x,y) it has four neighbors on diagonals: (x+1, y+1), (x-1, y+1), (x+1, y-1), (x-1, y-1) (we assume the simulation is run on a torus, so left and right edge, and top and bottom edges of the grid are glued together). I want to see what consequence this definition of the neighborhood has on the results of the simulation.

Let us start with an implementation on a grid of size 10 times 10 and plot the dynamics of the system. Here is the code running 30,000 steps of the simulation and want to see if we end up with all cells having the same type:

The code saves the result as an animated GIF file that you can see below:

Surprisingly, we reach a steady state that consists of 50% of true and 50% of false cells. This teaches us that one should be careful when designing ABM models, as small changes in the code can lead to significant changes it the behavior of the model. The point is that our neighborhood consisting of four diagonal neighbors defines two disjoint sets of cells on a square having even size. In von Neumann neighborhood, which also consists of four negihbors (but top-down and left-right) we would not have such a problem.

Let us investigate our flawed model for different sizes of the grid.

Checking different sizes of a grid

Before we can do it we first need to think of some rule that detects that the simulation has reached a steady state and at the same time is cheap to check.

There are many ways to do it. Let me propose the following reasoning here. If we have a square toroidal grid whose side is d we have 2d^2 pairs of nodes that are neighbors. To see this note that we have d^2 agents and each node has 4 neighbors; in other words the grid is a 4-regular graph on d^2 nodes, so it has 2d^2 edges.

Notice that if we in a continuous sequence visit every edge of this graph at least once and we always see the same color on both ends of the edge we have reached a steady state. Additionally, each edge of the graph is visited with the same probability in each tick. Now assume that we run this process for t ticks. The probability that we have never picked some concrete edge during this time at is (1-1/(2d^2))^t. Since we have 2d^2 such edges, by union bound, the probability that we have not picked at least one of the edges is less than 2d^2(1-1/(2d^2))^t. We want t to be large enough so that this probability is small. Assume that we want this probability to be less than 1e-6. We thus need to find a minimum t that satisfies 2d^2(1-1/(2d^2))^t<1e-6 as a function of d. Using the approximation log(1+x) ≈ x for x close to 0 we get that t > 2d^2*log(500_000d^2). For example for d=10 we can compute that t must be at least 3546. In other words if for 3546 steps we do not make any swaps of agent’s state we are very likely to have reached a steady state.

Using this derivation let us put our simulation in a function:

Notice, that I have additionally added @assert checks that make sure that indeed we have reached a steady state. However, we make this check only once as it is expensive.

In the output the class value is number of true cells in the grid.

Let us now run this simulation for d ranging from 4 to 11 and 2048 times for each size of the grid and keep the results in a data frame:

First, we want to analyze if indeed for even grid size we have three different possible outcomes and for odd sized grid we have two possible steady states:

Indeed this is a case. Moreover we note that:

Finally let us calculate the average time to reach steady state by d and plot it:

The resulting plot is: 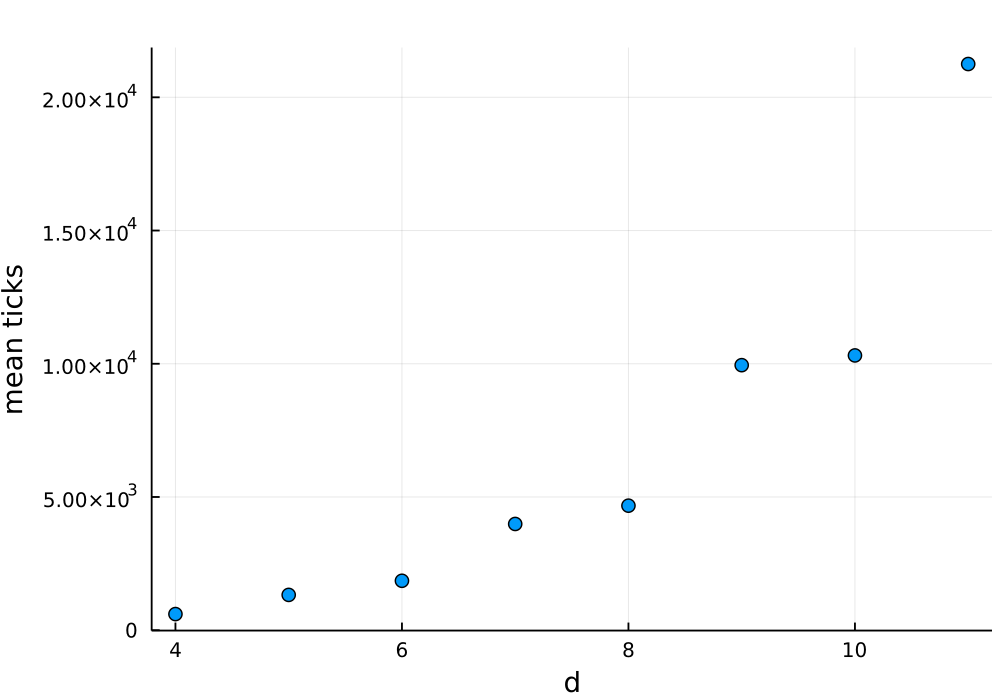 What is interesting is that there is much bigger increase of the time when we move from even to odd d than when moving from odd to even d. What is the reason for this? The reason is that for odd d the agents’ graph is connected. There is a single component having d^2 elements. While for even d we have two connected components, each having d^2/2 size. We have just learned that it is much faster to independently reach a steady state for component of size d^2/2 twice than to reach a steady state of a single component of size d^2.

I hope you enjoyed the post both from ABM and Julia language perspectives. I tried to avoid going into too much detail, both from mathematical and implementation side of the model. If you have any questions please contact me on Julia Slack or Julia Discourse.