Recently I have written a blog post about a simple agent-based model in finance domain. This is a follow up post in preparation for Social Simulation Week 2020 workshop on agent-based modeling using the Julia language that will be given by Przemysław Szufel and me.

This time I have decided to present a simple SIR model implementation using an agent-based design.

The Julia codes presented in this post are also available as a Jupyter notebook here.

We assume that we have a finite population of n agents that live on a discrete torus that has (xdim, ydim) size.

If you have not heard of such a model of the space then imagine it is a (xdim, ydim) chessboard whose top and bottom, as well as left and right borders are glued together. Thus you never fall-off the board — you can travel e.g. to the right infinitely as the space is wrapped. Here is a plot illustrating the gluing process:

and here is the end result 😄: 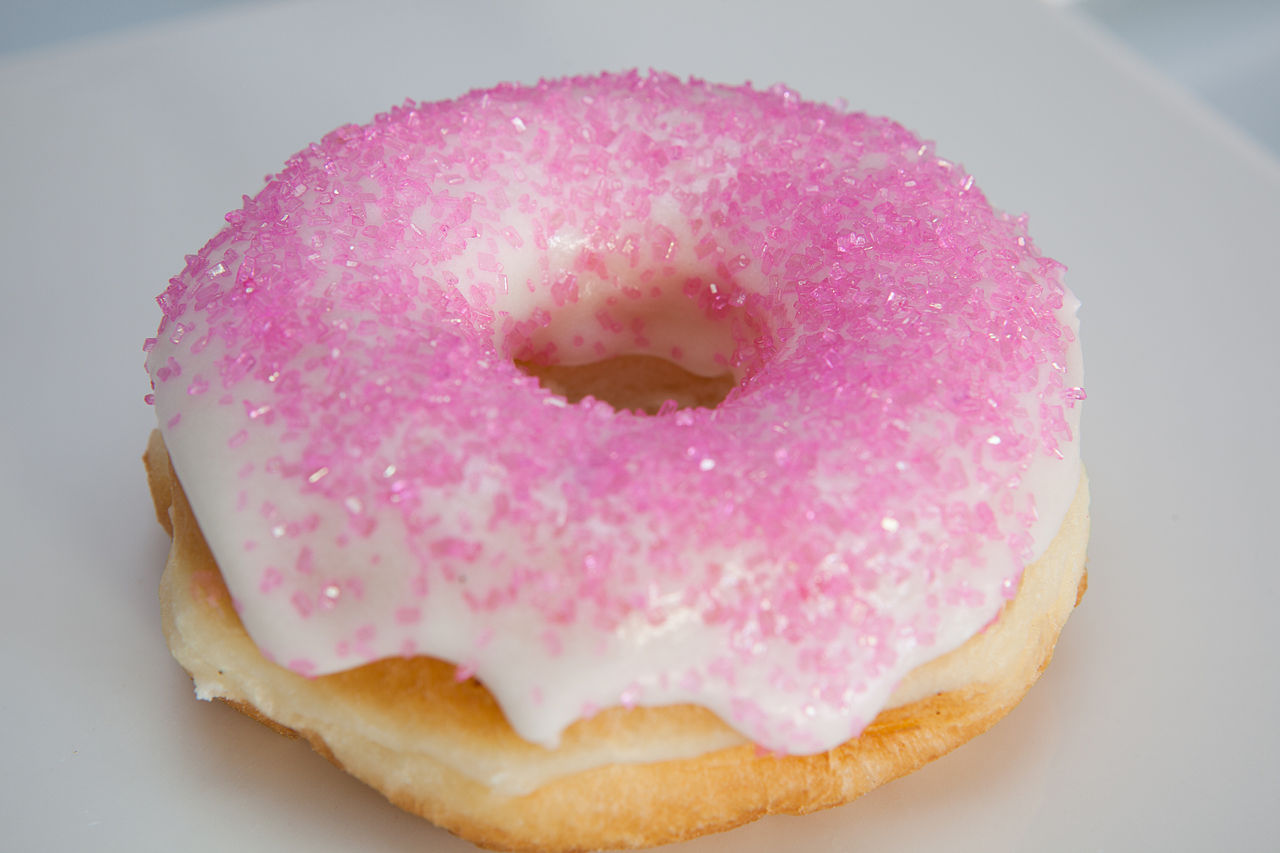 The torus model of the space is quite popular in simple agent-based models as it is similar to a square grid, but does not have borders nor corners.

We assume that agents independently move around our torus in a discrete time. Some agent in time moment tick randomly chooses to move up/stay/down and left/stay/right (so in total there are nine possibilities, one of which is to stay in place).

In particular the above rules mean that at some moment in time several agents can occupy the same cell. This is where the SIR epidemiological model comes into play. We assume that there is some disease and an agent can be in one of four states:

There are the following rules for moving between states in our model:

Initially we assume that infected number of agents is in an infected state. We run the simulation as long as there is at least one infected agent.

In this post I present an implementation of an agent-based simulation that captures the dynamics of this system and allows us to track changes of its state in time.

Implementation of the model

This post is written under Julia v1.5.0, PyPlot v2.9.0, and StatsBase v0.32.2 (normally I recommend to make sure that you have exactly the given versions of the packages installed, but in this case I only use their basic functionality so you can safely assume that any version should work). I assume that you use just Julia REPL (in a terminal or in an IDE like VS Code), but all examples should also work in Jupyter notebook.

To import the required packages write:

If you get an error loading the packages most likely they are not installed. In this case add them by running:

Let us now move to definitions of data types that we will use in our model:

We have created three types:

Let us now move to a function that initializes the state of the simulation:

We see that essentially it populates the Environment container. Note that initially there are infected number of agents in the agentI state, and the rest of them is in agentS state. Each agent initially gets a random location on the grid. We also make sure to correctly initialize the grid and stats variables.

As we have noted above the Agent container is immutable. Therefore we have to define functions that take an Agent object and return a new Agent object if the Agent is to change its state.

In each tick of the simulation we first update the type of the agents, which is handled by the following function:

Note that this function’s name ends with ! which is a convention that the function changes its env argument. In this case it changes the agent types stored in agents field of env mutable struct.

Note that each time an agent type is changed we have to update the collection env.agents with a new value as Agent type is immutable.

Also the condition a.tick == tick && continue might raise some questions. We use it to make sure that agents that became sick in a given tick to not recursively infect other agents in the same tick (in our model it has only performance implications as we assume that agents can get infected only if an already infected agent stays in the same cell; but this would start to matter if we allowed e.g. a wider infection radius — which is an easy extension to version of the model we present — as then a chain reaction could be triggered in a single tick, and we want to avoid this).

The other collective action of agents is their movement that is defined here:

Here a notable thing is that we clear entries of a grid cache with the empty! function for each cell of grid matrix and then populate it anew with updated locations of the agents.

The last thing we need to do in each step of the simulation is collection of the statistics. This is a relatively simple operation and is implemented using the following code:

In this function we use the countmap function form the StatsBase.jl package to get numbers of agents of each type in a given tick, next we use a get function to populate env.stats dictionary. The use of get is needed as in general the status dictionary returned by countmap does not have to contain all types of agents (e.g. in tick one of the model agents are of type agentR or agentD are not present).

We are now ready to define the main loop of the simulation:

Note that in this function we take advantage of the fact that env is mutable and increment tick by 1 in each step. Next we repeatedly update agents’ types, move them and collect statistics as long as there is at least one infected agent.

Let us try running the model for some sample parameterization. We assume to have 2000 agents living on a 100x100 grid. The duration of infection is 21 ticks, we initially place 10 infected agents (so it is 0.2% of the total population) and assume that 5% of agents that get infected eventually die:

You should get a plot similar to this one: 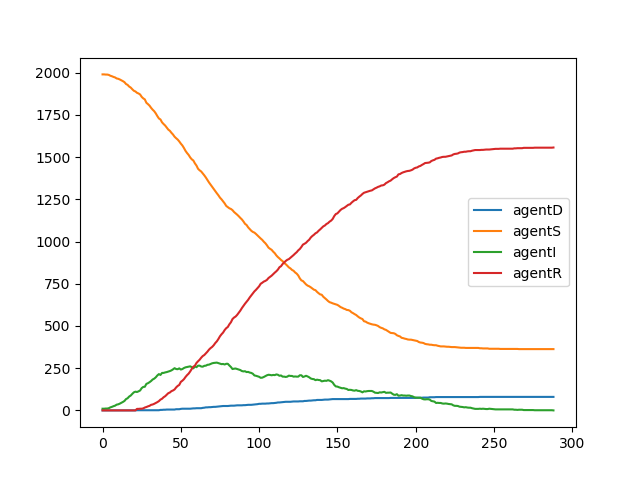 We see that the epidemics died out at around 300 ticks and around 80% of the population went through the disease (agents that have agentS type at the end of the simulation were unaffected).

As a second experiment let us check how does the fraction of infected agents depend on the length of the infection. Here is the code (it should run under 30 seconds): 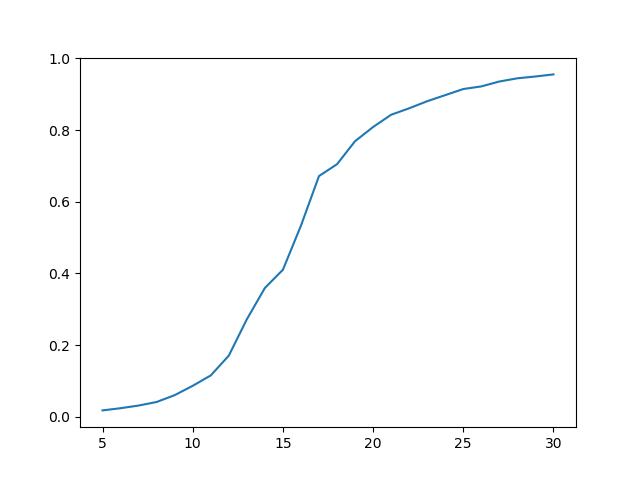 Of course these are just two samples of the analysis that can be made with this model. Feel free to change the assumptions of the model or the experiment setup if you would like to investigate it more.

In this post I have shown how you can create a simple agent-based model without having to use specialized packages. Still it is worth to know that there is e.g. an excellent Agents.jl package that provides a lot of utility data structures and functions for building agent-based simulations.

To recap the things related to the Julia language usage for building agent-based simulations I wanted to show in this post:

After the post I have received feedback from CGMossa with a Rust implementation of my code. I really recommend to check it out as there is a lot to learn about Rust from this code. You can find it here.