Recently I observe a constant raise of interest in the Julia language in community working with agent based models. I think that the reason is relatively simple (here I am probably biased, but I am really convinced about it, having used a vast number of programming languages to create such models in the past): Julia code is clean and expressive while at the same time it allows you to achieve relatively easily a decent performance.

I also think that the beauty of Julia is that you can relatively effortlessly create complex simulation models without having to use specialized packages. Most of the useful functionality is available out of the box in Julia Base. This does not mean of course, that there is a lack of specialized packages that can help you develop such models, as there is e.g. an excellent Agents.jl. I just want to say that you can go really far without much effort just by learning the core language.

In this post I want to present an implementation of a very simple model of volatility clustering on financial markets that was proposed by Rama Cont. I will discuss this model during the planned workshop on agent based modeling using the Julia language that will take place on-line during the Social Simulation Week 2020 (I will probably post more details on it when the exact schedule is out).

Additionally in the second part of the post I show an example how you can perform simple data modeling tasks using Julia.

The Julia codes presented in this post are also available as a Jupyter notebook here.

Our agent based model is defined as follows.

By \(Z_t\) denote the sum of all buy bids minus sum of all sell bids placed by agents in period \(t\). Then we define the return of the asset in that period as \(r_t = Z_t / (n \cdot\lambda)\), where \(\lambda\) is a parameter of the model, that can be interpreted as damping factor of the returns.

Now agents observe \(r_t\) and each agent with probability \(q\) sets its \(\theta_i(t)\) to be \(|r_t|\). Observe that with this mechanism if the returns \(r_t\) are large in absolute values agents become less likely to trade in the future, while if it is close to \(0\) more trades are likely to take place in next rounds.

We will want to check if the distribution of asset returns \(r_t\) produced by this model exhibits positive excess kurtosis (as would be expected in financial markets).

In our model we have three parameters \(n\) (number of agents), \(\lambda\) (scaling factor of the returns), and \(q\) (probability to change \(\theta_i(t)\) in one round). A careful reader will note that the model has one less parameter than the one described in Cont (2007). The reason for this is explained here, and it does not affect our analysis. Additionally we will need to specify the time, as the number of ticks of the simulation, during which we will track the simulation of our model.

An implementation from the past

Several years ago (before Julia was available) I used the following implementation of the described model using the R language.

I knew, that I am using loops, so this code would not be super efficient, but still I expected it to be reasonably good, as most of the heavy-lifting (calculation of r[t] and updates of theta) is vectorized.

A benchmark of the performance of this implementation is the following:

So in practice (what we are going to do shortly) I had to design an experiment and leave the computations running for many hours to get any results that would allow to perform the analysis. For instance testing a full factorial design with 51 levels of \(\lambda\) and 51 levels of \(q\) would already take 2 hours assuming taking one measurement per design point (which is a very small experiment).

An implementation using the Julia language

Here is a way to rewrite the implementation of the model to Julia:

Let us check the performance our our code:

We see that it is around 30 times faster than R. Also note that I have run @time twice, as the first time compilation cost is included in the timing (in this case it turned out to be negligible).

The R and Julia codes are almost identical (translating R to Julia took me literally a few minutes). The notable differences are:

Note that these optimizations mean that my code does only 6 memory allocations (which you can see in the second output of @time). Usually avoiding allocations means that your code will run fast, as allocations are expensive.

Let us perform a minimal analysis of the output of our model to showcase several packages in the Julia ecosystem. Here is the code that we will run (it is a most basic experiment design for this model, as normally you would want to include like making sure we compute statistics of a stationary distribution, or collect independent measures per design point but I do not want to overly complicate things):

I did not have to put it in a function, but it is a good practice in Julia to wrap your code like this. Note the use of push! to populate the data frame with data. We will use this pattern again later in this post.

Let us now try to run it and do some simple visualization of the results:

Here is the produced plot: 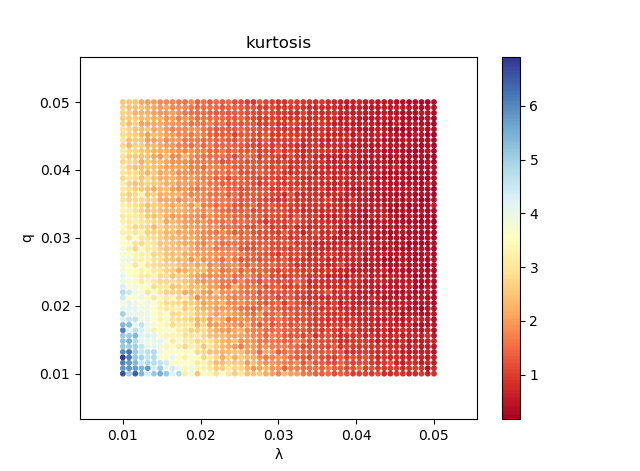 We observe that the model visually looks to be more sensitive to changes of \(\lambda\) than to changes of \(q\) and that there should be a significant interaction effect between them. In general: the more often the investors change their decision threshold and the higher the asset return damping factor is the less leptokurtic the distribution of returns is.

We can quickly check it using a metamodel of the form:

Here is the code that estimates it:

Note that in the example we find the exponents to which \(\lambda\) and \(q\) should be raised to get the best fit (which is quite good considering the resulting \(R^2\)). In particular in the line

we dynamically inject the user defined f1 and f2 functions into the model formula. Similarly in

we use exponentiation to transform the variables.

We can see that there is a significant interaction effect between the variables, as expected. As the resulting estimated function is non-linear, in order to check the range of marginal effects of \(\lambda\) and \(q\) in the domain of our design space, we will use the ForwardDiff.jl package:

which confirms our visual observations that both variables have a negative derivative for the points in our design space and that the results are more sensitive to the changes of \(\lambda\) than of \(q\).

In terms of the performance note that the most expensive part, that was to create the df data frame, took under 5 minutes instead of estimated 2 hours in R.

This was a minimal showcase how you can implement a very simple agent based model using the Julia language. What I wanted to present is that the implementation of the model is as short as in e.g. R language, while at the same time you can get significant performance benefits (which is a very relevant issue when developing agent based models).

In the second part of the post I did some simple analysis of results of simulation experiment using this model to show several packages that are often used in such situations. I hope you enjoyed it!

As a final comment let me ask for some crowdsourcing :), as I want to show the participants of Social Simulation Week 2020 a comparison of several options against the Julia language. Therefore, similarly to the case of a recent post, I will be happy to update this post with codes provided by the readers to compare the complexity and performance. The challenge is to maximize speed (primary criterion) and at the same time have a relatively simple code (secondary criterion). I will benchmark and post the results of the submitted codes here. In general as we want to concentrate mostly on speed any programming language is welcome, with a restriction that we want to use CPU computing on a single thread. If you are interested please send me your implementation of cont_run function either via e-mail on Julia slack.

Appendix: Implementations provided by the readers

Here are the implementations of the model I have received from the readers.

Tomasz Olczak has sent me Python ports of the code (thank you for working on it). The first naive version is almost identical to Julia code:

It runs roughly 7.5 times slower than the Julia code, which you can check e.g. like this:

Next goes an optimized version which uses Numba for run-time LLVM compilation to machine code:

This version is faster than the naive port, but still slower than Julia code:

Note that as of now Numba does not support in-place random number generation (a feature introduced only in the latest numpy v1.19). Hence to achieve optimal performance a trick was necessary which was to pre-allocate a pchange array and pre-populate it with random numbers. This puts additional burden on operational memory (and is in favor of Python implementation in general as in the Julia code we allocate pchange on each call of cont_run).

@CGMossa has prepared a very detailed Gist showing his Rust implementation of the model and comparing its performance with Julia. I think it is great piece of work (and a fully reproducible one) to study Rust coding patterns (@CGMossa - thank you for spending your time on this).

In therms of single threaed performance, Julia turns out to be roughly 4x faster than Rust for this model. If someone knows how to improve the performance of the Rust code I am sure that @CGMossa is open for suggestions and would check them out.