ABC of modules in Julia

Modules in Julia allow you to create separate variable workspaces. You can find all the details needed to work with modules in the Julia Manual.

In this post let me focus on one of the reasons to create modules in your programs: you can control which names defined in the module get exposed outside the module.

In order to show this let us create a simple AR(1) process simulator, to see some story — not just dry definitions. For completeness we will first introduce a bit of theory of such processes, next we will discuss how you can define your own module, and finally we will show how we can use it.

This post was prepared under Julia 1.4.2 and is mostly targeted at people who want to start using Julia for doing computation-heavy operations (therefore I allow myself to drift away and comment on many things that are are not a core of the example we give, but are a natural questions that arise in practice when writing similar codes).

where \(\varepsilon_i\) are independent random variables that are normally distributed with mean \(0\) and variance \(\sigma^2\).

For the AR(1) process to be stationary we assume \(|\phi|<1\). Also clearly we have \(\sigma\geq0\), as standard deviation must be non-negative.

We will want to create a simulator of this process in Julia.

In order to implement it we need to derive the distribution of the unconditional mean and variance of \(X_t\). It is simplest to get them assuming they exist and are independent from \(t\) (they do as we take \(|\phi|<1\); I omit some technical details here).

For expected value we get:

For variance we get:

The last question is what is the unconditional distribution of \(X_t\). We know its mean and variance (and they are both finite), so it is easiest to unroll the AR(1) process definition recursively \(s\) times:

Definiing a module with a AR(1) simulator

First let me show a complete way how I would normally define such a simulator. Below I discuss some of practices that are present in the code.

First let us start with a discussion why we want to use a module for this code at all. The reason is that inside the module we define a constant AR1_COMMON_DOC and three functions: sample_start, ar1! and ar1. However, I do not want AR1_COMMON_DOC nor sample_start to be exposed to users. They are just an internal implementation detail, therefore only ar1! and ar1 are exported from the module.

Now let me comment on some other things that are present in this code (and maybe you will find these practices useful):

Before we start make sure that you have the packages that we will installed in the right versions. We will use: StatsBase.jl v0.32.2 and PyPlot.jl v2.9.0.

First start your Julia REPL with the command, in Linux:

(what we do here is informing Julia that it can use two threads for computations — we will soon use it; I have chosen two threads as I assume most current computers have at least two cores so that everyone should be able to follow this setting)

You can check if you have the packages in the right versions by switching to package manager mode in the Julia REPL (press ] to do it) and writing: status command. If you do not have them or the versions are incorrect while still in the package manager mode write the following commands (I assume that you do not have Project.toml and Manifest.toml files in your current working directory):

(I have removed the output that some commands produce as it is not required for our purposes).

Now we are all set to test our code. Exit the package manager mode by pressing a backspace.

In order to use the module write:

Note that it is crucial to write a . before the module name as the module is defined in the current global scope of so called Main module (you should have seen Main.AR1 printed when you pasted the definition of the module in the Julia REPL).

You were probably using statements like using Random (like we did in the code of the AR1 module). This way of loading modules searches for them in standard library or installed packages. In our case we have a custom module defined only in this session, so we need to add . to allow Julia to locate it.

After making the using statement we can use ar1 and ar1! functions. Let us first check the help for ar1 (to make sure it correctly incorporates the AR1_COMMON_DOC string). Press ? in the Julia REPL, write ar1 and press enter to get:

We conclude that all looks as expected.

As a fist task let us plot one sample of our simulator output:

You should get a plot similar to (it will not be identical, as we did not set the seed of the random number generator; in all the results that follow you should expect the same situation — they should be similar but probably not identical to what I show): 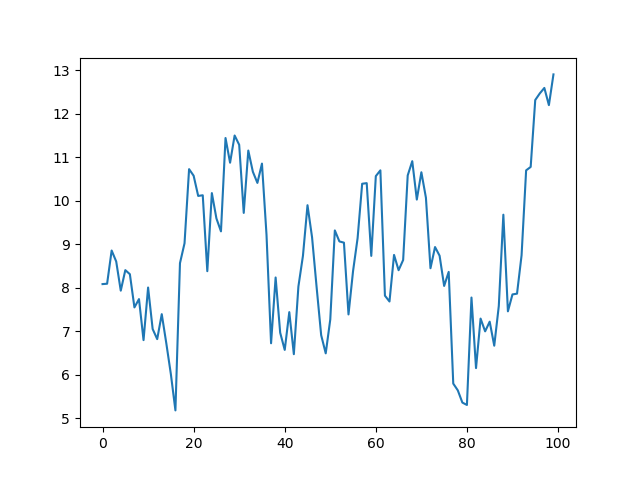 Next let us check if indeed \(\phi=0.9\) for the process we considered. For this let us generate a longer data set to have the results more accurate:

and we get a value very close to 0.9 as expected.

Let us check it for a default start:

and indeed we see that the results are correct.

If we would set start to be equal to the expected mean, but non-random, then we will get a visible bias in the variance of the first few observations (but the mean will be correct):

and the generated plot of variance looks like this: 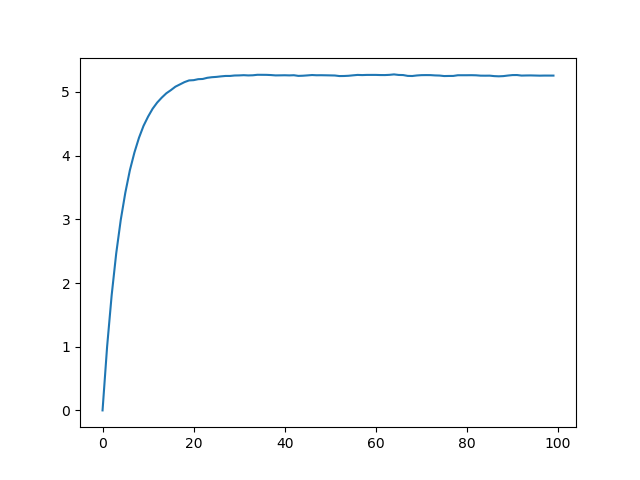 Setting start to be biased will similarly bias the first few expectations in the generated process.

As a performance test assume that we were interested in running the mean test but not for \(10^6\) but \(10^8\) repetitions to get more accurate results. The problem is that in that case we would need memory roughly of order \(8\cdot 100 \cdot 10^8\) bytes, which is 80GiB (not something I can store in RAM of my laptop).

A basic code that does such a check, while not having to store all the generated data, could look like this:

Let us test it (the first run is supposed to compile the function to give more accurate results for the second run):

So we we need around 100 seconds to finish, and indeed a bit over 80GiB of data got allocated. Can we do better?

In the first step let us try to avoid some allocations by using ar1! instead of ar1:

and test shows the following:

Indeed — we have almost halved the run time.

Let us finally turn to threading (the JULIA_NUM_THREADS=2 option that was quietly waiting for being used from the beginning of our session):

Let us check if all went as we expected:

Using 2 threads we have almost halved the computation time. Note that this time we have allocated separate vectors for each thread and accessed them using the tid variable to avoid race condition issues.

Most common problem when using modules

Before we finish let us comment on a thing that people often find confusing then working with modules. Here we will just use the modules that are present by default in a standard Julia REPL session: Main (where all your work happens) and Base (containing the definitions of standard functions you can normally use without importing anything). In particular functions sin and cos are defined in Base module. Now consider the following example:

In the case of sin you first call sin(1) which makes Julia associate name sin in module Main with the function sin defined in module Base. So later when trying to set a value of 2 to sin you get an error (name sin is now bound to a function and you are not allowed to change its meaning).

For the other case for cos you give it a value in module Main first. From that moment cos is bound to 2 (of course you could change this binding later), which overshadows the function with name cos from module Base. As you can see in such a case to call cos from Base you have to qualify its name and write Base.cos(1).

If you are still with me — thank you for reading the post and I hope you enjoyed it!